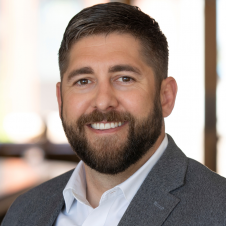 Braden Merritt is Managing Director of Operations of Humphreys Capital. In this role, he manages the scalability and efficiency of back office systems, supports executive decision making with business analytics, and reports to the Investment Committee.

Braden is a 7-year combat veteran who began his career as a reconnaissance officer in the United States Marine Corps, where he deployed to Iraq, Afghanistan, and at sea with the U.S. Fifth Fleet. In 2013 Braden attended graduate school before transitioning into management consulting with The Boston Consulting Group, where he focused on strategic growth across diverse industries. He later served as a regional program manager for Google Fiber, spanning five markets, improving the efficiency, accuracy, and scalability of operating cost management and capital expense reporting in a startup environment. Braden joined Humphreys Capital in 2017.

He and his wife, Alissa, have four children and reside in Oklahoma City, Oklahoma.